The artist’s odyssey from Cuba to Europe and back again turned him from a disciple of Picasso into a feverish painter of gods, monsters, mystery and sex

By Jonathan Jones (The Guardian)

In 1941, a group of intellectuals who believed in black magic sat in a villa near Marseille shuffling tarot cards as they waited and waited for a chance of a boat out of Nazi-occupied Europe. The tarot pack did not show their futures. Instead they drew and painted on the cards, turning the arcane symbols into portraits, the portraits into dreams. Another way to pass the time was by playing a surrealist version of the parlour game Consequences, collaborating to create bizarre collages. The time hung heavily, but in the end they sailed for the New World.

It must have seemed like a voyage backwards to Wifredo Lam. This Cuban-born artist was one of the bored refugees who played with the tarots at the Villa Air-Bel, along with André Breton, leader of the surrealist movement, who would become a lifelong supporter of Lam’s work.

Born in Cuba in 1902, Lam had been studying and practising art in Europe since the 1920s. His paintings on the eve of the second world war were starting to get recognition – not least because Picasso encouraged him and helped him to get exhibitions. It must have seemed a crushing blow to have to flee France and return to Cuba just when his career was advancing. After all, who ever heard of great art coming from Cuba?

Yet, as this fascinating exhibition shows, Wifredo Lam became a great modern artist the moment he stepped off the boat in Havana. This is a powerful encounter with a painter whose odyssey from Cuba to avant-garde Europe and back again gave birth to art that is simultaneously sophisticated and raw.

In truth, Lam’s early paintings are imitative. The art critic Robert Hughes wrote – as an Australian – of suffering the “cultural cringe” when he went from the margins to the centre of the cultural world, in his case from Australia to 1960s New York. It is obvious that Lam had a bad case of the cultural cringe in prewar Spain and Paris, too. He repeatedly painted what amount to pastiches of Picasso and Matisse. They’re nice pictures but completely derivative: no wonder Picasso took up Lam as a disciple, accepting his art as the homage it was.

If Lam had stayed in Europe he might have stayed a mediocrity. Instead, he was forced to go back to Cuba, where his godmother had been a Santería priestess. The Santería religion mixes Yoruba myths and rituals from west Africa with the darkness and savagery of Spanish Catholicism. For an artist immersed in Picasso’s primal masks and Breton’s surrealist passion for dreams, the folk beliefs of Cuba were incendiary. Lam reconnected with the tales and superstitions of his childhood and created a series of surrealistic masterpieces.

Sinister, glaring gods gaze out of jungles of spiky knotted foliage and iridescent colour. Masks and sacrificial knives glitter in the dark. Lam’s Cuban paintings of the 1940s are much bigger than his earlier works and infinitely more original. In Light of the Forest (1942), a naked, masked giant hides in a jungle of dense stalks and immense leaves. The shapes are simple and stark, the scale daunting. All the erudition of Lam’s prewar study of modern art informs his mature masterpieces: there are still unmissable echoes of Picasso but they are rich and exhilarating. The “primitivism” of the European avant garde crashes creatively with his Santería heritage.

These big, mysterious dream paintings have a lot in common with the art of Jackson Pollock, Mark Rothko and other young north Americans in the 1940s. After sailing with Lam to the Caribbean, Breton carried on to New York where American painters under the surrealist influence started painting mythic canvases such as Pollock’s Guardians of the Secret (1943).

Yet there’s a big difference between Lam’s dream jungle and the New York art that would evolve into abstract expressionism. And it’s not the difference you might expect. Lam’s Cuban perspective is very similar to the US art of his time in many ways. Yet the abstract expressionists (apart from Willem de Kooning) shied away from sex. Their preferred psychologist was Jung, not Freud. By contrast, Lam’s paintings throb with sex. Bulbous breasts and buttocks bulge in his fevered imagination. He paints a hothouse of desire.

In a series of startling portraits of a half-woman, half-horse being, he creates a sensual myth of great power and strange authority. His art in the 1950s is full of evil satanic rites and lurid sexuality – all painted in a potent abstract style. Lam’s European education never did leave him. He was one of the last true surrealists. That is why sex is so prominent in his paintings and it’s why André Breton championed him in the 1950s when his pungent art was surrealism’s most significant card.

After Jackson Pollock put a canvas on the ground and dripped paint on to it, after New York “stole” the idea of modern art from Paris, the dream art of the surrealist movement looked old and worn out, yet Wifredo Lam kept it alive. He was still painting abstract jungles swarming with gods and monsters when the Colombian novelist Gabriel García Márquez published One Hundred Years of Solitude in 1967. He did not stop painting the fantastic until his death, in Paris, in 1982. His art is the last tarot of surrealism and a tropical wonder of modern painting. 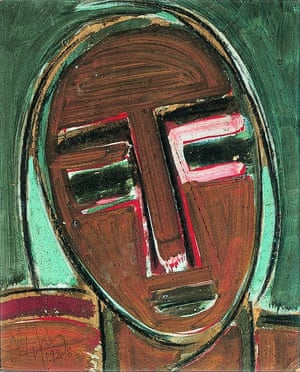 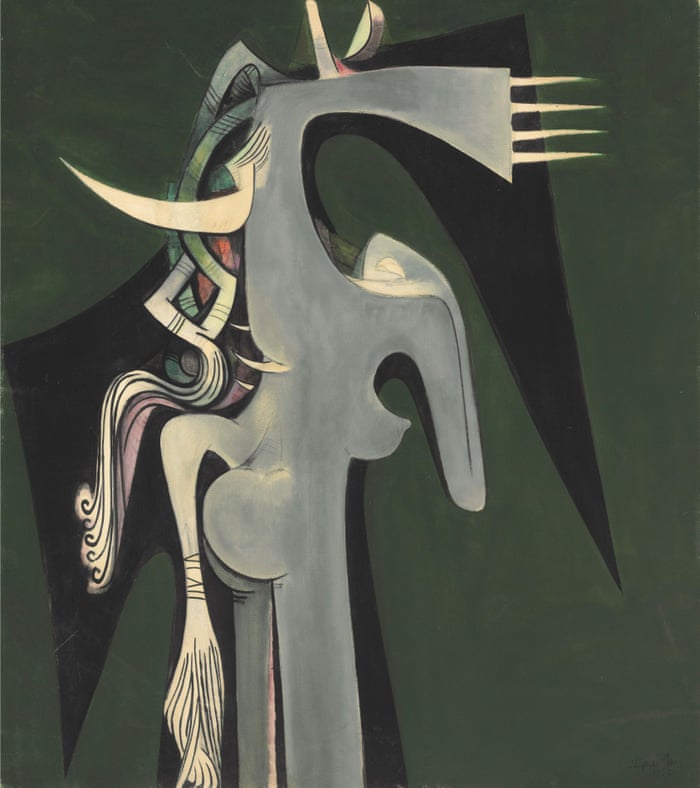 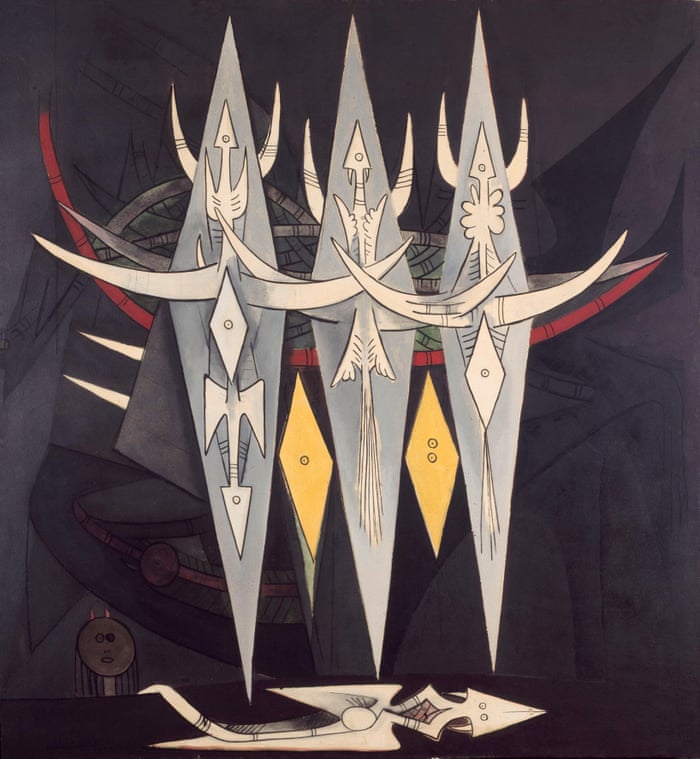 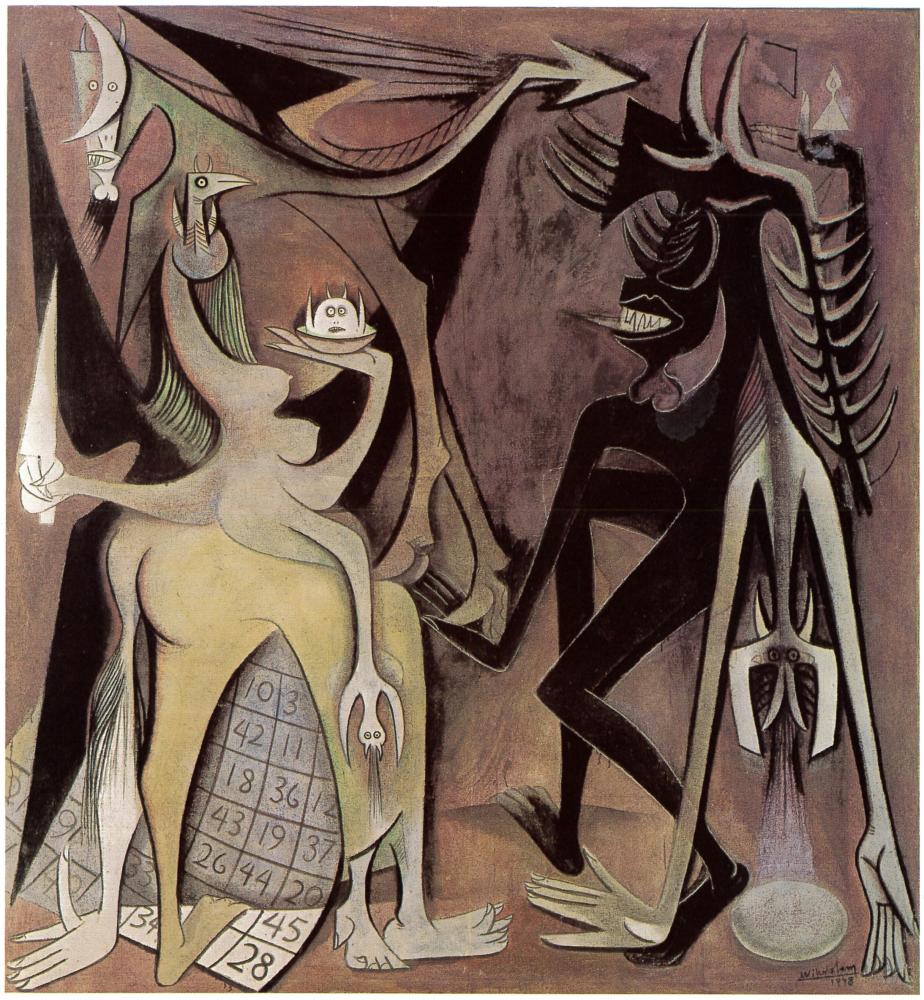