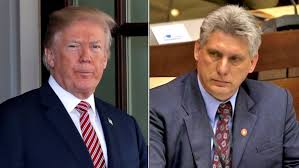 President Miguel Diaz-Canel described on Saturday as ‘political illiterates’ those who propose to ‘free’ Cuba and Venezuela, in response to statements made by U.S. President Donald Trump against these nations.
Those who ignore the history of our people should not speak of two free and sovereign nations that have inflicted more than one defeat on the empire, wrote the Cuban leader on Twitter, referring to statements Trump made on Saturday in Florida.

Diaz-Canel further questioned what did the Trump administration intend to do by making more plans against Cuba and Venezuela, instead of facing the epicenter of the pandemic in its territory.

Trump said yesterday in Florida that he would continue fighting ‘for Venezuela and for our friends in Cuba’, despite denunciations of ongoing political and economic aggression on those nations with notable negative effects.

The Republican president visited the Southern Command on Friday in the Doral city, Florida, to review the progress of an anti-narcotics operation in the Caribbean and the eastern Pacific presented last April.

He then attended a round table at the baptized Doral Jesus Church where he boasted about the policies adopted by his administration against Venezuela and Cuba.

The attacker who shot with an assault rifle the Cuban Embassy in Washington last April 30 was linked to that church, Cuban Foreign Minister Bruno Rodriguez had denounced.

Rodriguez also rejected the President’s statements and criticized his electoral opportunism, which he described as ‘mendacious’.

On another twit on domestic issues, President Diaz-Canel called for a comprehensive approach to food sovereignty and nutritional security in Cuba in order to include all the chain of food production.

The director of the Soil Institute, Luis Gomez, reported that 39 bio-products are currently being produced and another 18 are under development.