Cuba’s rolling museum of vintage USA cars is well known, its British classic cars less so but on Tuesday they were put on display in Havana for Prince Charles during his historic visit to the island. He rocked up in a shiny black 1953 MG to the rally at the John Lennon park known as Havana’s most British corner with its statue of the Beatles’ star and yellow Submarine.

By Sarah Marsh in Havana (Reuters)

Cuba’s rolling museum of vintage U.S. cars may be world-renowned, but it was the island’s collection of British vehicles, from Jaguars to MGs, that were on display on Tuesday for Prince Charles and his wife Camilla during their historic trip to Havana.
On his second full day in Cuba, the heir to the UK throne drove a black 1953 MG TD to a rally of British cars at a park known as the island’s most British corner, with its statue of John Lennon and Yellow Submarine bar.
While local musicians played covers of songs by British bands like the Beatles and Queen, the Prince of Wales spoke with owners of the cars, which like their U.S. counterparts, predate Communist-run Cuba’s 1959 revolution.
The royals’ three-day visit comes as Britain seeks to strengthen relations with Cuba as part of the island’s broader normalization of relations with the West, although the Trump administration has rowed back on the U.S.-Cuban detente.
On Monday evening, they met at the presidential Palace of the Revolution with the Cuban President Miguel Diaz-Canel, who said their visit was an honor for Cuba that underscored the good state of bilateral relations.
“This visit is a real boost to the club, which has only met up a few times so far,” said Lupe Fuentes, 66, who co-founded the group last year after realizing there was a wealth of British cars on the Caribbean’s largest island.
Many of the around 50 members are Cubans who inherited the cars from their parents and grandparents and for whom they are now prized family possessions in a country where cars are expensive and hard to come by.
“He asked us how old the car was and how we managed to preserve them,” said Fuentes, adding that the club served to pool knowledge and resources for restoring the cars.
“British cars are harder to maintain than the U.S. ones because there is a constant inflow of U.S. parts but many of the British ones are no longer even made,” said Fuentes’ partner Ricardo Medell, 63. “We end up inventing a lot.”
He said Cubans often replaced the original parts with alternative or homemade parts. His car, a red and white Austin Healy from 1959, was now probably 90 percent “fabricated,” he said.
The club posted ad on Cuban state-run TV and radio in order to find other owners of British cars, and stopped some they spotted on the street to invite them to join.
That’s how they convinced Fernando Gonzalez, 30, who runs a silver Jaguar from 1958 as a taxi, to join.
“The prince asked me how difficult it was to maintain and I said the most difficult thing was the steering system because of all the potholes,” said Gonzalez.
“I expected him to be more reserved but he was very chatty.”
Charles and Camilla, who tacked the Cuba stop onto a two-week Caribbean tour of former and current British territories, also stopped to talk with members of a club of British motorbike owners and UK expats living in Havana, who were waving flags.
They also talked to enthusiastic local residents who eschewed royal protocol to display Cuban warmth, with one woman hugging Charles enthusiastically. 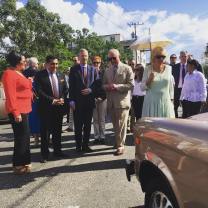 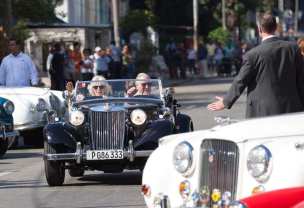