Bruno Rodríguez: “We are certain that the amendments will be rejected”

In statements offered to the press today, the Cuban Foreign Minister spoke about what will happen tomorrow, October 31, regarding the debate on the annual resolution presented in the UN by Cuba against the U.S. blockade. The vote itself will take place this Thursday, November 1

Cuban Foreign Minister Bruno Rodríguez stated today in a press conference that the United States government, in its desire to create greater tensions and increase hostility, is posing obstacles to the forthcoming vote against the blockade in the UN.

He explained that the U.S. State Department originally presented a document consisting of eight paragraphs of amendments to the draft resolution “Necessity of ending the economic, commercial and financial blockade imposed by the United States against Cuba.” However, the text was hastily divided into eight separate amendments that will be submitted to the United Nations General Assembly for analysis tomorrow. END_OF_DOCUMENT_TOKEN_TO_BE_REPLACED 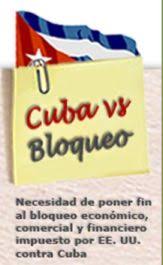