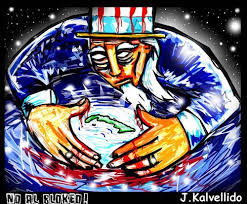 From Sonic Attack to Microwave: What’s Next, Kryptonite?

Just when it seemed like it had reached its limit, the story of a group of U.S. diplomats who allegedly fell ill in Cuba became even less credible this week.

The United States now considers microwave waves to be the “main suspects” of symptoms reported by members of its Embassy staff in Havana.

In less than two years, there has been a shift from “acoustic attacks” to viruses and from concussions to now microwave waves.

On Saturday, September 1,The New York Times published an article entitled, ‘Microwave weapons are the main suspects of the disease among U.S. Embassy officials.’

Douglas Smith, director of the Center for Brain Injury and Repair at the University of Pennsylvania, told the newspaper that those allegedly affected suffered brain injuries and microwaves are suspected by the researchers. END_OF_DOCUMENT_TOKEN_TO_BE_REPLACED