US Gov. Meddling Machine Boasts of ‘Laying the Groundwork for Insurrection’ in Nicaragua

As Nicaraguan student protest leaders meet with neoconservatives in Washington, DC, a publication funded by the US government’s regime change arm, the National Endowment for Democracy (NED), boasts of spending millions of dollars “laying the groundwork for insurrection” against Daniel Ortega.

While some corporate media outlets have portrayed the violent protest movement gripping Nicaragua as a progressive grassroots upswell, the country’s own student leaders have suggested otherwise.

In early June, Nicaragua’s leading young activists went on a junket to Washington, DC, on the dime of the US government-funded right-wing advocacy group Freedom House. The Nicaraguan student leaders were there to beseech Donald Trump and other right-wing US government officials to help them in their fight against Nicaraguan President Daniel Ortega.

On the excursion to the US capital, the young activists posed for photo-ops with some of the most notorious neoconservatives in the US Congress: Senators Ted Cruz and Marco Rubio and Rep. Ileana Ros-Lehtinen. The Nicaraguan student leaders were also shepherded to meetings with top officials from the State Department and the US government soft power organization USAID. There, they were reassured that they would have Washington’s full-throated support.

A month before the student protesters’ meetings with ultra-conservative lawmakers in Washington, a publication funded by the US government’s regime change arm, the National Endowment for Democracy (NED), bluntly asserted that organizations backed by the NED have spent years and millions of dollars “laying the groundwork for insurrection” in Nicaragua.

This article openly boasting of US meddling was published in the Latin America-focused news website Global Americans, and was authored by US academic Benjamin Waddell, the academic director of the School for International Training in Nicaragua. Following publication of this piece, Global Americans replaced the term “insurrection” with the more innocuous word “change.” The original headline can however still be seen in the article’s URL.

Despite the cosmetic alteration, Waddell’s article offers a remarkably candid assessment of the impact of the National Endowment for Democracy’s sustained investments in Nicaraguan civil society. The author’s conclusions inadvertently echoed those of Nicaraguan President Daniel Ortega and his supporters, who have framed the protests as a carefully staged plot backed to the hilt by Washington.

“International press has depicted the rapid escalation of civil unrest in Nicaragua as a spontaneous explosion of collective discontent, triggered by the government’s changes to its insolvent social security system and rooted in more than a decade of authoritarian rule by the Ortega-Murillo family,” Waddell wrote. “And while the underlying causes of the turmoil are rooted in government mismanagement and corruption, it’s becoming more and more clear that the U.S. support has helped play a role in nurturing the current uprisings.”

In another striking passage, Waddell concluded, “the NED’s current involvement in nurturing civil society groups in Nicaragua sheds light on the power of transnational funding to influence political outcomes in the 21st century.”

A history of meddling

The NED is a leading agent of US soft power that has meddled in other countries’ affairs since its founding at the height of the Cold War, in 1983. Its first success took place in Nicaragua, where it incubated anti-Sandinista media outfits like the La Prensa newspaper through a cut-out, PRODEMCA, that was also covertly funded by allies of Oliver North.

In 1990, the Sandinistas were defeated at the polls by the right-wing candidate Violeta Chamorro, whose family happened to own La Prensa. Chamorro’s victory represented the culmination of nearly $16 million dollars in NED grants to anti-Sandinista political parties and media outlets.

“A lot of what we do today was done covertly 25 years ago by the CIA,” Allen Weinstein, a founder of the NED, commented in 1991.

In the years that followed, the NED and its partners have helped swing elections for right-wing neoliberal candidates in Russia and Mongolia in 1996; fomented a coup that drove Haiti‘s democratically elected president Jean Bertrand Aristide from power; and directed millions towards dismantling Venezuela‘s socialist government, an ongoing effort complimented by crushing US sanctions.

The protests that have erupted in Nicaragua have brought the NED’s influence back into focus all over again. According to Waddell, the NED has spent $4.1 million in the country since 2014, helping grow 54 groups into major players on the political scene and “laying the groundwork for insurrection.” 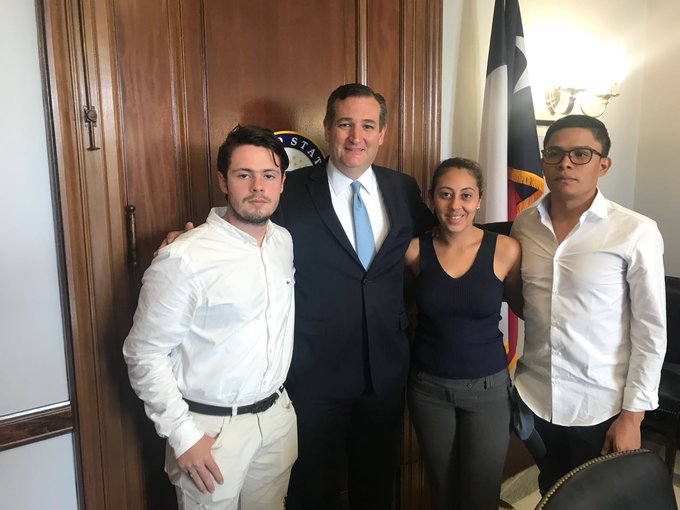 Senator Ted Cruz on twitter: Humbled to meet with Nicaraguan student leaders who are risking their lives fighting for freedom. Their bravery and perseverance will overcome the Ortega dictatorship’s tyranny. #SOSNicaragua
The US-backed network behind the protests

The unrest that has paralyzed Nicaragua was triggered by the announcement by President Daniel Ortega of reforms to the nearly bankrupt social security system. The International Monetary Fund and a local business umbrella group had insisted on changes that would have raised the retirement age and gradually privatized health clinics, threatening some of the most significant gains of the Sandinista revolution.

When Ortega countered with a proposal that would have demanded a greater contribution into the system from businesses and retirees, with business owners paying the lion’s share, a sector of the public exploded with outrage. The angry reaction to Ortega’s plan, reinforced with intensive coverage by opposition media sources, became the spark for rolling protests that have set the country on fire — literally, in many cases.

The most visible faces of the anti-Ortega movement have not been retirees impacted by the social security reforms, but urban, politically unaffiliated students seeking a total victory. They have forged an alliance with the traditional right-wing, pro-business opponents of Sandinismo, along with a marginal sector of former Sandinistas alienated by Ortega’s rapid consolidation of power.

Meanwhile, masked men toting homemade mortars and firearms have formed the front line of the tranque road blocks that have already drained Nicaragua’s economy of some $250 million in revenue. To date, some 170 people have been killed in the chaos. As the death toll mounts on both sides, talk of a new civil war seems like a more than remote possibility.

Since the unrest began, the NED has taken measures to conceal the names of the groups it funds in Nicaragua on the grounds that they could face reprisals from the government. But the main recipients of backing from Washington were already well known in the country.

Hagamos Democracia, or Let’s Make Democracy, is the largest recipient of NED funding, reaping over $525,000 in grants since 2014. The group’s president, Luciano Garcia, who oversees a network of reporters and activists, has declared that Ortega has turned Nicaragua into a “failed state” and demanded his immediate resignation.

The Managua-based Institute for Strategic Studies and Public Policy (IEEPP) has received at least $260,000 from the NED since 2014. The grants have been earmarked to support the IEEPP’s work in training activists on “encouraging debate and generating information on security and violence.” The funding has also covered efforts to monitor the “increased presence of Russia and China in the region,” an obvious priority for Washington.

As soon as the violent protests against Ortega were ignited, IEEPP director Felix Mariadiaga brought his agenda out into the open. A former World Economic Forum Young Global Leader educated at Yale and Harvard, Mariadaga was hailed by La Prensa for having “sweated, bled and cried alongside the young students who have led the protests in Nicaragua that continue from April until the end of May.”

Asked by La Prensa if there was any way out of the violence without regime change, Mariadaga was blunt: “I can not imagine a way out at this moment that does not include a transition to democracy without Daniel Ortega.”

“We have given ourselves a terrible image”

This June, Mariadaga led an opposition delegation to Washington to denounce Ortega’s rule before the General Assembly of the Organization for American States. He was joined by Anibal Toruno, director of Radio Dario — another longtime recipient of support from NED (PDF), and one of the key hubs of anti-Ortega media in the Nicaraguan city of Leon.

While Mariadaga was in Washington, he was charged by the Nicaraguan police with overseeing an organized criminal networkthat has murdered several people during the violent unrest that has gripped the country. Mariadaga slammed the allegations as a “political persecution” and a “ridiculous accusation,” but postponed his return to Nicaragua. The US State Department backed him up with a statement of vehement support.

At the same time, a group of Nicaraguan student leaders of the anti-Ortega protests were in Washington to lobby the Trump administration for help in bringing their country’s leader down.

Among the US officials to receive the students was USAID director Mark Green. “We need to stand with those who are standing up for things that we need to believe in,” Green said of the students, in an interview with McClatchy.

Aside from NED, USAID has been the most active promoter of regime change against socialist-oriented governments in Latin America. In Nicaragua, USAID’s budget topped $5.2 million in 2018, with most of the funding directed towards training civil society and media organizations.

The Nicaraguan students’ junket to Washington was paid for by Freedom House, a US government-funded NED partner whose agenda typically aligns with the neoconservative wing of the American foreign policy establishment.

Freedom House crafted an itinerary for the students that culminated with a photo-op with some of the most hawkish Republicans in Washington: Senators Ted Cruz and Marco Rubio, and Rep. Ileana Ros-Lehtinen.

Back in Managua, another prominent student leader, Harley Morales, reeled in disgust at his peers’ appearance on Capitol Hill. “It was terrible,” Morales told the newspaper El Faro. “They (Cruz, Rubio, and Ros-Lehtinen) are the extreme Republican right. We are very unhappy with this trip; they were paid for by the United States and an agenda was imposed on them. We have given ourselves a terrible image.”

Though he hoped for “an error correction plan,” Morales conceded that the grip of powerful outside interests on the student protesters was tightening. “All movements now have advisors,” he lamented. “Movers and shakers. Children of politicians, businessmen… They have a very clear political line.” 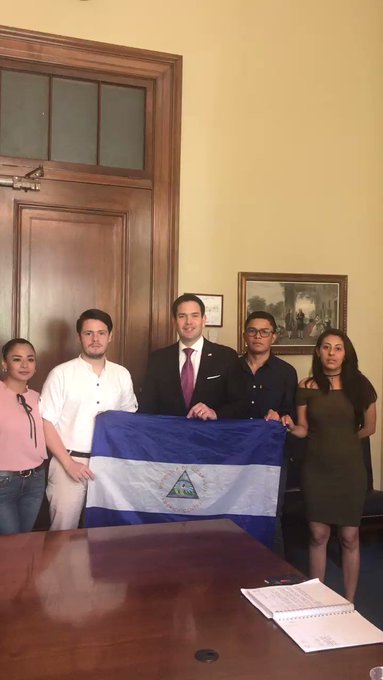 Max Blumenthal is an award-winning journalist and the author of books including best-selling Republican Gomorrah: Inside the Movement That Shattered the Party, Goliath: Life and Loathing in Greater Israel, The Fifty One Day War: Ruin and Resistance in Gaza, and The Management of Savagery, which will be published later this year by Verso. He has also produced numerous print articles for an array of publications, many video reports and several documentaries including Je Ne Suis Pas Charlie and the forthcoming Killing Gaza. Blumenthal founded the Grayzone Project in 2015 to shine a journalistic light on America’s state of perpetual war and its dangerous domestic repercussions.