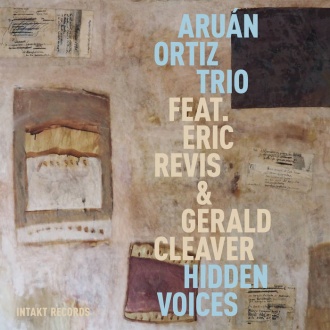 Aruán Ortiz  , who was born into the Cuban world of total music in 1973, spent his boyhood walking through the working class streets of his home city Santiago de Cuba. There, he experienced popular music, folkloric dance companies, random amateur guitarists, vocalists jamming and singing, choirs, rumba-percussion and Cuban-Haitian groups — all this while simultaneously exposed to European classical music at the local conservatory.

In 2008, he found both his musical home in Brooklyn and a mentor in the great Chicago pianist Muhal Richard Abrams, founder of the Association of the Advancement of Creative Musicians, a community-grounded organisation dedicated to breaking all boundaries in music.

It’s been quite a musical journey and Ortiz’s 2016 album Hidden Voices, recorded in New York, made with the Detroit-born drummer Gerald Cleaver and Los Angeles bassist Eric Revis, is a summation of his sonic travels — an amalgam of all that he has heard and learned, powerfully fused and expressed through his keys. The Hidden Voices of the album title are his “friends, mentors and teachers who have nurtured my hunger for knowledge and the forces in Santiago de Cuba that catalysed my development in formative years and are now my source of inspiration.”

The trio set off with Fractal Sketches, inspired by the construction and shape of rural African dwellings. “Everything is a pattern and can be translated into music,” says Ortiz and his spatial sound, with Cleaver’s shimmering cymbals and the piano’s percussive repetition, create a timbre which is almost solid. Ornette Coleman’s tunes Open and Close and The Sphinx follow, with the onrush of keyboard charges and fierce patterning of phrases of affirmation that are powerfully sculpted.

Caribbean Vortex begins and continues with a chorus of claves and expresses the Gaga rhythms of Ortiz’s own Cuban-Haitian roots, while Analytical Symmetry, another evocation of architecture, expresses the Ortiz ideals of “balance, beauty and the full spectrum of possibilities,” with Revis’s bass and Ortiz’s piano conducting an exchange of slow and serene voices.

17 Moments of Liam’s Moments is a dedication to Ortiz’s son and uses the Cuban son genre, full of his precious island’s cultural history and then it’s back to New York and the Thelonious Monk tune Skippy darting playfully from the pianist’s fingers, with Revis and Cleaver throttling along beside him. Finally, the people’s song that all Cubans know Uno, Dos y Tres, que Paso mas Chevere completes the album with a proud statement of belongingness.

In December 2016, Ortiz travelled to Zurich to record the solo album Cubanism, inspired as much by the visual as the sonic, with Cuban painter Wifredo Lam the prime inspiration. Again, an architectural sense permeates these pieces and you can hear the processes of deconstruction and reconstruction happening concomitantly in almost all the album’s tracks.

Ortiz still plays with those forms he heard as a boy in Santiago and later in Spain and New York, all expressed with a crystalline clarity and beauty in piano sounds of an extraordinary eclecticism and nakedness.

This album sets you wondering where Ortiz will go next. “Everything is moving. Everything is flexible. Everything has its own life,” he says, “I try not to be comfortable with anything I do musically.”

Comfort has never been a watchword of a jazz which discovers and everything that Ortiz hears he replants in new sounds, new places, new sonic structures. Hear these records and you will understand exactly what that means.