Varadero voted one of the world’s best beaches. 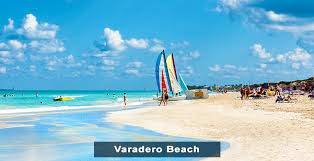 Varadero, Cuba’s number one beach resort, was voted third best in the world, according to the 2018 Travelers’ Choice Awards, sponsored by TripAdvisor, which honor the best and safest tourist destinations around the globe.

Cuba came in behind Grace Bay (Turks and Caicos Islands), and Baia Do Sancho in Brazil, on the list of the 25 best beaches on the planet.

The rankings were decided based on the opinions of millions of users from different countries collected over the last 12 months, who highlighted the security, beauty and crystal clear waters of Cuba’s number one beach resort.

Just a couple of months after Hurricane Irma hit the island, the famous beach resort was up and running again.

The award also confirms Varadero’s popularity among national and international tourists alike, as well as being a safe place for visitors.

In 2017, Cuba received over four million international tourists, while Varadero – home to 52 hotels and an international airport – saw a record 1,700,000 visitors, thus egistering over one million for the 10th year in a row.

To this must be added the fact that Cuba was named “the safest country for tourism” this past January during the 38th International Tourism Fair, in Madrid, Spain.

However, despite meeting international sector standards and receiving global recognition, the U.S government is continuing to advise its citizens to “reconsider” traveling to the island.

Cuba currently carries a level three travel advisory from the U.S. State Department, which suggests citizens “reconsider travel” to the country, given that “we believe U.S. citizens may…be at risk.” Such claims stand in stark contrast to the safety and positive views of Cuba held by millions of visitors, including countless U.S. citizens.

Meanwhile, the island continues to be the only country in the world to which U.S. citizens are prohibited by law from visiting as tourists. However, despite these restrictions and policy changes made by the current U.S. administration toward Cuba, over 600,000 citizens from that nation visited the island last year.